Why We Standup – Agile Team Collaboration

Take a minute and look at the two photos below. You might first notice that they both show one of the greatest football teams of all time. But I don’t need to remind you of that. What they also show are two very different styles of meeting. The first image shows a quick huddle style meeting, generally used to retroactively plan adaptation to a changing environment. The second image portrays a much deeper proactive dive into long term planning and analysis. How long do you think each of these meetings lasts? 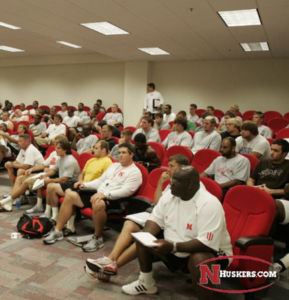 If you said “Just a few important seconds” for the first, and “just a few important hours” for the second, you would probably be right. The key here, however, is that you said “important” in both of your answers. You did, didn’t you? Well, if not, I’m going to. These are representations of meetings found in an agile development environment. I want to mainly talk about the first one – the daily stand-up.

It’s 9am and I hear groaning next to me. That’s odd, I think to myself, I’m at work.  Then I realize where the sounds of constipa… er, consternation, are coming from. They emanate from my nearby co-workers who just realized it is time for yet another stand-up. Sound familiar?

Why would a stand-up meeting cause so much dread in a workplace? And if stand-up meetings were so dreadful as to cause a train of groaning zombie-esque employees to shuffle down the hall as they grumble about not getting any work done, why would I call it an “important” meeting? Simple, because it is, but it is almost always done wrong.

Look at the first photo above again and ask yourself if that meeting is important? That meeting is being conducted in the middle of a game at the cost of a time-out. Time-out’s are limited and can mean the difference between winning and losing, but they exist for a reason. There is a realization that a message needs to be conveyed to the whole team, and using a limited resource to pause the game is a fair trade to relay that message. Here is where the main change needs to exist in the typical stand-up. If Bo (coach above) called a time-out to give a status update, for example he lets the quarterback know that he has thrown the ball 8 times for 132 yards with one touchdown, and let the receiver know that he has caught 3 passes and should expect 2 or 3 more, not much use would come out of it. Similarly, a stand-up that simply goes through a status update of each developer and their work for the benefit of the Project Manager’s metrics, results in a waste of time for just about everyone.

No, this time-out consuming meeting is used to focus on collaboration and prioritization. Teams, whether in sports or in the office, need to ensure there is transparency so that they can function as a well-oiled machine. This machine needs constant communication back and forth or it won’t recognize problems when they arise. In football, the team on the field may not know that there is a gaping hole in the secondary being exploited, but the coaches in the booth may have noticed, so they relay this information during the time-out. In development, many dependencies or impediments in code may not be recognized, causing timelines to slip, or things to just plain blow up. Time to utilize the stand-up and synchronize people. What time do you have?

So yeah, a stand-up is another meeting on your calendar, but one really meant to save time. If done correctly, the stand-up should actually reduce the amount of additional meetings, or at least reduce the number of attendees required for those meetings.  Step 1 to time saving should be pretty obvious — STAND UP! Nobody likes to stand there for long periods of time, so often there is a decision reached by the team to allow sitting down. If this is your team, have you also noticed that your stand-up meeting has become much more than a quick report from each participant? I thought so. The longest stand-up meeting you ever attend should be no longer than 15 minutes. If it is, something is broken. Standing up definitely helps with this. It takes advantage of our natural propensity towards laziness and forces us to get to the damn point and move on. Save the jibber jabber for the elaboration meetings. Come on man, Coach gets it done in :30!

That being said, watching the clock to announce when standup is over is also the wrong approach. There is nothing wrong with a 5 minute stand-up meeting, if that’s what it takes. A good rule of thumb to follow is: a) Our standup cannot have more than 15 participants, and b) Our participants each get 1 minute to go over their needs. If an individual’s reporting starts to take more than 1 minute, you should take the conversation offline. A very helpful tool for this is the “Parking Lot” written on a whiteboard, where, if a participant finds themselves starting a conversation rather than the status update, their needs are noted on the parking lot and the meeting moves on.

Now, the observant one noticed that I said “status update” in the last paragraph. Yes, a status update is absolutely the wrong use of this important 15 minutes (hopefully less) of everyone’s life. Here is how you fix that. Imagine status as a snapshot in history; then imagine the proper message as an Andy Richter style “in the year 2000” snapshot. So, for example, one might say “I did this and here is where things stand” in their historical report. What the Year-Two-Thousander may say is, “I’m looking to get to this point and need this to do it”. By suggesting this, however, I’m breaking from the fundamentals of the stand-up meeting. The three questions to be answered by each attendee:

These fundamental questions should still be answered. Where the problem lies is in the monotony of following a script. If you come to the meeting expecting to quickly blurt out a couple answers to satisfy the questions, you are most likely becoming really good at having a little magic bag of canned responses. In fact, the guy next to you probably has a very similar response and has only paid attention to your report enough to know when to puke out his own update. Ah, the useless stand-up meeting in full effect! A circle of bored, glossy eyed robots (feel free to replace this with monkeys – you know who you are) just waiting to go back to their cubicle. What we need to do is break the rules a little bit. Use the three questions as a guide, but really take a holistic look at what these three questions are trying to accomplish. Is the machine well-oiled and functioning at peak efficiency? Is the team all on the same page and driving for a touchdown? Do we all have the same end goal and complete knowledge of how to get each other to that goal? Start to use the standup less as a boring status meeting for the Project Manager, and more as a team collaboration meeting.

Well, I’m off to standup!

Posted on August 8, 2018 in Project Management

In Two Days I Improved Conversions By 28%. So What Went Wrong?